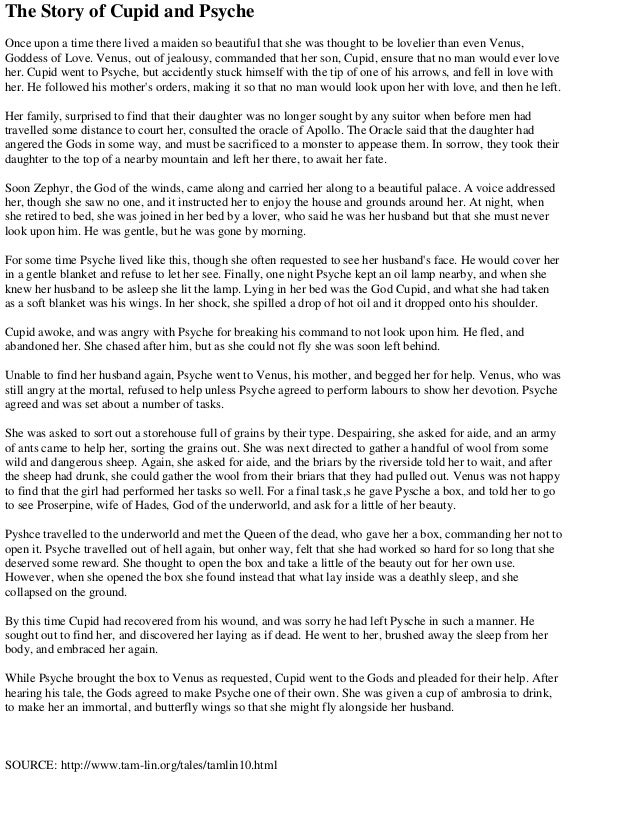 
Scattered about, lay sickles and rakes, and all the instruments of harvest, without order, as if thrown carelessly out of the weary reapers' hands in the sultry hours of the day. This unseemly confusion the pious Psyche put an end to, by separating and sorting everything to its proper place and kind, believing that she ought to neglect none of the gods, but endeavor by her piety to engage them all in her behalf. The holy Ceres, whose temple it was, finding her so religiously employed, thus spoke to her, "Oh Psyche, truly worthy of our pity, though I cannot shield you from the frowns of Venus, yet I can teach you how best to allay her displeasure.

Go, then, and voluntarily surrender yourself to your lady and sovereign, and try by modesty and submission to win her forgiveness, and perhaps her favor will restore you the husband you have lost. Psyche obeyed the commands of Ceres and took her way to the temple of Venus, endeavoring to fortify her mind and ruminating on what she should say and how best propitiate the angry goddess, feeling that the issue was doubtful and perhaps fatal. Venus received her with angry countenance.

Or have you rather come to see your sick husband, yet laid up of the wound given him by his loving wife?

You are so ill favored and disagreeable that the only way you can merit your lover must be by dint of industry and diligence. I will make trial of your housewifery. But Psyche, in a perfect consternation at the enormous work, sat stupid and silent, without moving a finger to the inextricable heap. While she sat despairing, Cupid stirred up the little ant, a native of the fields, to take compassion on her.

The leader of the anthill, followed by whole hosts of his six-legged subjects, approached the heap, and with the utmost diligence taking grain by grain, they separated the pile, sorting each kind to its parcel; and when it was all done, they vanished out of sight in a moment.

Venus at the approach of twilight returned from the banquet of the gods, breathing odors and crowned with roses. Seeing the task done, she exclaimed, "This is no work of yours, wicked one, but his, whom to your own and his misfortune you have enticed. Next morning Venus ordered Psyche to be called and said to her, "Behold yonder grove which stretches along the margin of the water.

There you will find sheep feeding without a shepherd, with golden-shining fleeces on their backs. Go, fetch me a sample of that precious wool gathered from every one of their fleeces. Psyche obediently went to the riverside, prepared to do her best to execute the command. But the river god inspired the reeds with harmonious murmurs, which seemed to say, "Oh maiden, severely tried, tempt not the dangerous flood, nor venture among the formidable rams on the other side, for as long as they are under the influence of the rising sun, they burn with a cruel rage to destroy mortals with their sharp horns or rude teeth.

But when the noontide sun has driven the cattle to the shade, and the serene spirit of the flood has lulled them to rest, you may then cross in safety, and you will find the woolly gold sticking to the bushes and the trunks of the trees. Thus the compassionate river god gave Psyche instructions how to accomplish her task, and by observing his directions she soon returned to Venus with her arms full of the golden fleece; but she received not the approbation of her implacable mistress, who said, "I know very well it is by none of your own doings that you have succeeded in this task, and I am not satisfied yet that you have any capacity to make yourself useful.

But I have another task for you. Here, take this box and go your way to the infernal shades, and give this box to Proserpine and say, 'My mistress Venus desires you to send her a little of your beauty, for in tending her sick son she has lost some of her own. Psyche was now satisfied that her destruction was at hand, being obliged to go with her own feet directly down to Erebus. Wherefore, to make no delay of what was not to be avoided, she goes to the top of a high tower to precipitate herself headlong, thus to descend the shortest way to the shades below.

But a voice from the tower said to her, "Why, poor unlucky girl, do you design to put an end to your days in so dreadful a manner? And what cowardice makes you sink under this last danger who have been so miraculously supported in all your former? But the voice added, "When Proserpine has given you the box filled with her beauty, of all things this is chiefly to be observed by you, that you never once open or look into the box nor allow your curiosity to pry into the treasure of the beauty of the goddesses.

Psyche, encouraged by this advice, obeyed it in all things, and taking heed to her ways traveled safely to the kingdom of Pluto. She was admitted to the palace of Proserpine, and without accepting the delicate seat or delicious banquet that was offered her, but contented with coarse bread for her food, she delivered her message from Venus. Presently the box was returned to her, shut and filled with the precious commodity. Then she returned the way she came, and glad was she to come out once more into the light of day. But having got so far successfully through her dangerous task a longing desire seized her to examine the contents of the box.

But Cupid, being now recovered from his wound, and not able longer to bear the absence of his beloved Psyche, slipping through the smallest crack of the window of his chamber which happened to be left open, flew to the spot where Psyche lay, and gathering up the sleep from her body closed it again in the box, and waked Psyche with a light touch of one of his arrows. But now perform exactly the task imposed on you by my mother, and I will take care of the rest. Then Cupid, as swift as lightning penetrating the heights of heaven, presented himself before Jupiter with his supplication.

Jupiter lent a favoring ear, and pleaded the cause of the lovers so earnestly with Venus that he won her consent. On this he sent Mercury to bring Psyche up to the heavenly assembly, and when she arrived, handing her a cup of ambrosia, he said, "Drink this, Psyche, and be immortal; nor shall Cupid ever break away from the knot in which he is tied, but these nuptials shall be perpetual. Thus Psyche became at last united to Cupid, and in due time they had a daughter born to them whose name was Pleasure.

Edited by D. The inserted story of Cupid and Psyche is found on pages Lucius Apuleius was born about in northern Africa and was educated in Carthage and Athens. The account of Cupid and Psyche is presented in his novel The Golden Ass also titled The Metamorphoses , or Metamorphosis as an "old wive's tale" told by an old woman to comfort a young woman who has been abducted by a band of robbers and is being held for ransome.

In the main Bulfinch retells Apuleius' story with accuracy and sensitivity, but he does omit a few important details, for example: Psyche is pregnant with Cupid's child throughout her search for her lost husband, a fact emphasized by Apuleius. I want to be with you. I love you. Be my princess, be my true love forever. Psyche was silent. Cupid was so romantic. Psyche loved Cupid too. Cupid and Psyche married and lived in the dark palace. Psyche did not pay attention to the fact that Cupid was invisible.

She loved Cupid, and they were very happy. They panicked. You must go back. Take this lamp. Psyche went to Cupid with the light. Cupid was asleep. She saw his beautiful face.


He was so handsome. He was not a monster! At that moment, Venus was high on Mount Olympus.


Venus looked and looked for her son. She wanted her son and she wanted to kill Psyche. Suddenly, Venus saw the light. She saw Cupid. Psyche loved Cupid so she went up Mount Olympus. Cupid is my son. You are a human. You want to be a god? You want to be as beautiful as me? She was very jealous.

Venus made Psyche go get a magic box. On her way toward giving the box to Venus, she becomes curious, opens the box, and instantly falls asleep. Meanwhile, Cupid looks for Psyche and finds her sleeping. He awakens her, puts the sleeping spell back in the box, and takes her to Zeus to request her immortality.

A Happy Romance Between a God and a Mortal

Zeus grants the request and makes Psyche an immortal goddess. She and Cupid are married. Venus now supports the marriage because her son has married a goddess—and because Psyche will no longer distract the men on earth from Venus. This story centers on the power of true love.

Psyche first doubts that love, feeling that she must see Cupid in the flesh. She later redeems herself many times over when she proves her commitment, overcoming all obstacles in her way. Figuratively, love Cupid and the soul "psyche" is the Greek word for the soul belong together in an inseparable union. When Cupid sees Psyche, the soul in its beauty, he immediately wants to join with her. Somehow, this beauty is admired by men but does not lead to the kind of love that eventuates in a marriage proposal.

The happy ending, with Venus, Psyche, and Cupid all reaching a positive resolution, illustrates that when love is pure, all pains, sorrows, and challenges will align to ensure that the love is realized. Even nature, as the ants and eagle demonstrate, support true love. Of all the stories in the Greek mythology, none more clearly demonstrates that true love exists than this story. Moreover, Psyche reveals that true love is to be defended and supported no matter what the cost. This part of the myth is beautifully retold by the modern author C.

Lewis under the title Till We Have Faces. Psyche remains an unusual example of a female character who acts like a male hero. Although other female characters such as Artemis perform traditionally male activities, none so boldly acts as a hero might: overcoming seemingly impossible obstacles, fighting to win true love, achieving a status that is more than human. Importantly, Psyche is a rare being who begins as a mortal and ends as a divinity.

Her unique position raises questions about spirituality. Is the soul properly a thing of the earth or a thing of the heavens? How does Psyche's being change when she becomes immortal?

Was there something about Psyche that was more than human from the very beginning, and why did she win the attention of Cupid in the first place? The story continues to explore the distinction between humans and gods, as Venus is bitterly jealous of a mortal who draws other mortals away from her, a goddess. On earth, the soul, figured as Psyche, is amazingly beautiful but faces great trials.